Dog paw it is once again, as I found myself running like there was no tomorrow… Running to the end of the dock. Feet unlaced, and being paced by my newest companion, Lazarus. My new best friend, a lot of fur and hair on this husky-chow mix of a dog freshly rescued from the black hole.

This dive was perfect and had to be long and arched high enough to avoid Laz’s jump which at take off was simultaneous, but less like a dolphin- more like an arrow. The lake is always the lake. It has that cool and muddy Michigan taste to it, and on a hot day, seduces you with a chocolate coat of delicious creamy syrup that wraps around your body like slipping your hand into a glove, until it slaps you.

You spit it out, the lake, as your head reemerges, and shake off droplets invading your eyes. A little bit of mud gets through the back of your nose but you rise triumphant like a Roman warrior, back arched, a mist of water splattering the screen as you break through the water line with outstretched arms embracing life and wind.

There is a slow motion old time movie quality to what just happened, a grainy sepia brown rerun, of man and companion running side by side to the edge of a cliff that was shared only by those two. The long end of a dock that at noon, blisters the feet. A dreamy, slow, stop and go feeling that people get at the movie theater, right before the main attraction, when they watch a scene that they wish they could remember but they can’t.

It’s usually the type of shaky replay you see when watching videos of someone you loved at 2 in the morning. It means they died, and it’s always jittery.

It’s funny when you do that run. Your dog knows. Your dog always knows before you do, that you two are gonna do that run. Almost as if they willed you to, but they always know and tend to get a head start on you. So now it’s catch up time and 30 yards to the end of the dock and pure bliss. Side by side in a world that no one else watching can capture, where the timing is crucial and the effort at take off is the key to a flawless dive or getting a lot of dog paw and scratches on your back as she crosses your line and lands on it when you both hit the water. Well, dog paw it is once again.

That was then and this is now…

Before Breakfast: Pulling Ice out of the Water Bucket....

Her name is Laz, she is a rescue dog and lies by my side as I type.

Last night she did a side step. Unlike her. And then she did it again. So unlike her. And then our other pound puppy, Australian shepherd- pit bull mix- could barely walk out of a paper bag, well she knocked Laz over, and then I got worried. A while ago I made an A-frame for that dog. Looked online for pictures of dog houses, and got some ideas. This was the mother of all dog houses and by the time I was done, it looked like Noah’s ark. Sturdy just like her, a condo in the woods, designed to survive Michigan winter snow.

This dog was tough, she survived everything.

A big bolt of brown fur against white snow. 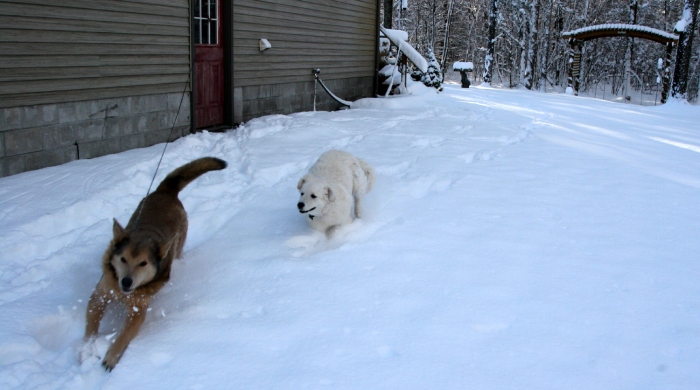 Fearless. More than a few raccoons slipped away to the other side because of her. She was scary thick, and always had an air about her, a wall she built to protect her from whomever sent her to the pound, it was hard for her to get close and trust.

She trusted me. I had her on a leash a long time ago at the lake house, and she got tangled up in the bushes to the point she was choking on her collar. She was so panicked, and I managed to cut her collar off- and she never forgot it. But she doesn’t like anyone messing with her neck since then.

Last night she let me touch her neck- so I know something is so wrong with her.

I slept on the couch through the night (because my 3rd dog- a Kuvasz – can be pretty mean to Laz) and hung out with her. We basically rotate dogs in and out, you do what you have to- to make sure that no one gets hurt.

I think she might have had a stroke, because her head leans to the side. Maybe she is just in the mist- looking for the end of the dock…. 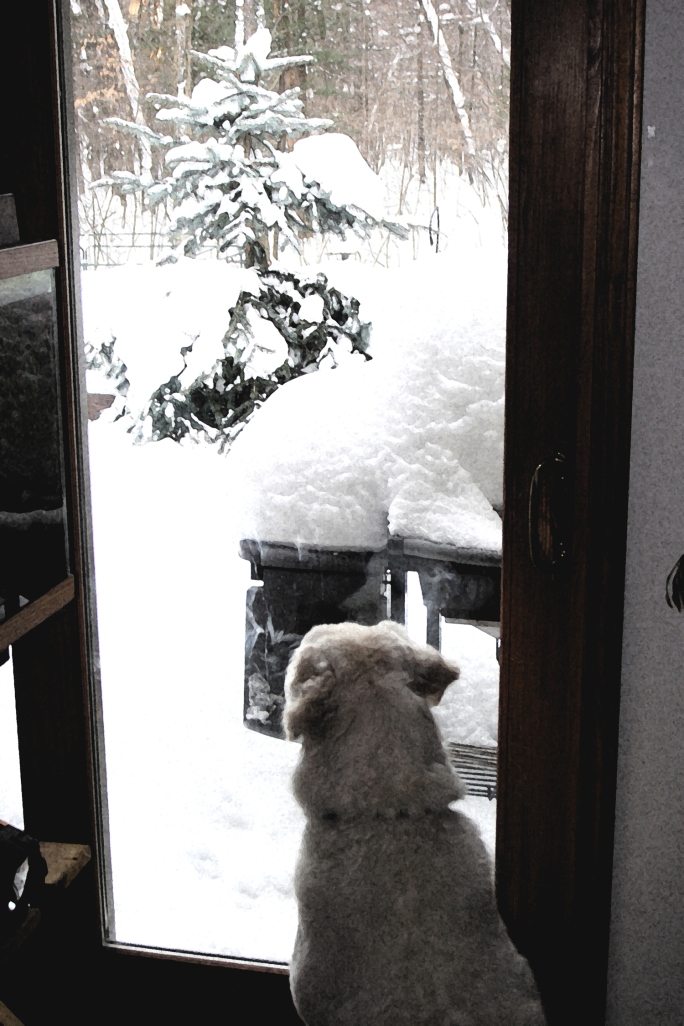 Leave a Reply to The Flats ... Cancel reply